Steele Properties completed a significant $5 million rehabilitation at Woodside Village, a 100-unit Project Based Section 8 family property located in McKinney, TX in 2013, including $165,000 on important safety and security upgrades.

Felicia Graves, Woodside Village Community Manager explained, “Prior to the security improvements, I received numerous complaints and many lease violations ranging from drug use to violence including many shootings. There were many reports of assault, burglary, disturbance, domestic violence and trespassing.”

Steele Properties made following upgrades and property enhancements to increase resident and staff safety and security:

Graves said, “I’ve seen many significant security improvements throughout my three years as community manager at Woodside Village Apartments and have developed close relationships with our current tenants. We have removed the bad tenants who caused many of our security problems due to our wonderful partnership with our police department.”

Security patrol is now provided by the McKinney Police Department to ensure resident safety and has made a big difference. “I have seen a lot less traffic throughout the property and there has been a large reduction in violence,” said Felicia. “Now that residents know we have security patrol as well as monitoring cameras, people are much more careful about what they do and are more respectful of the property.” 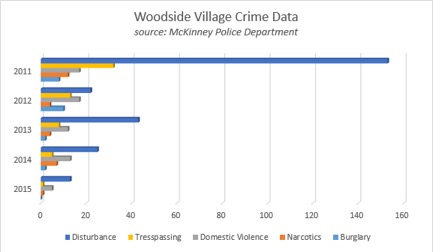 A recent Woodside Village resident safety and security survey was conducted: 100% of responders felt that the security improvements improved safety and that they feel much safer than before with 90% of responders strongly agreeing. One resident commented: “I think the manager at Woodside is doing a great job helping residents feel safe. As long as we all stay together as a community, things around here will get even better.” Another resident said: “I don’t feel any danger here. I see kids playing outside all the time and as long as they feel safe, then this is a good place to call home.”