Steele Properties completed the rehabilitation of historic Castle Park, a 209-unit multifamily and elderly Project Based Section 8 community in late 2011, including over $170,000 on significant safety and security upgrades.

Greg Adams, a homicide detective for the Berkeley Police Department who has worked on the security team at Castle Park for ten years, explained “Prior to the security improvements, there was a high volume of violations every week. A lot of them were violent crimes and property break-ins. About 80% of crime was due to unwanted visitors. I personally have been injured responding to incidents here on the property.”

Steele Properties made following upgrades and property enhancements to increase resident and staff safety and security:

“These improvements have made have made an enormous difference,” explained Adams, “The guarded entrance door and restricting access to one entry point have made a significant impact in reducing violence and property crime. The new cameras that were installed are much better than what we had before and allow us to better monitor the property. As a result, our response time is much faster now and we can quickly resolve a situation before it escalates.”

Current residents feel much safer with the addition of the security staff and resident violations and complaints have decreased. Castle Park Community Manager Melody Day commented, “There’s no doubt the security enhancements have made Castle Park safer. Prior to the improvements, the building had about 100 doors that were always propped open. Those doors are now shut and there is only one entrance door which is guarded. Older and newer residents definitely appreciate the security staff and love the guest sign-in policy because now there are no unexpected and unwanted visitors.”

Detective Adams commented on receiving excellent feedback, “The vast majority of residents have told me the community is much safer and they are glad to live in such a secure environment. Even outside visitors, especially parents of residents who live here, have said they are very happy to see a police presence monitoring the premises. I have also heard comments from healthcare workers who tend to elderly residents that they have seen a huge improvement in safety here at Castle Park.”

Crime has dropped significantly since Steele Properties acquired Castle Park. Data from the Normandy Police Department shows a significant drop in crime, with many categories such as trespassing, burglary and destruction of property declining by 100% from 2011 to the present. In 2011, 307 crimes were reported at Castle Park. Currently, only 3 crimes have been reported, a 99% reduction. 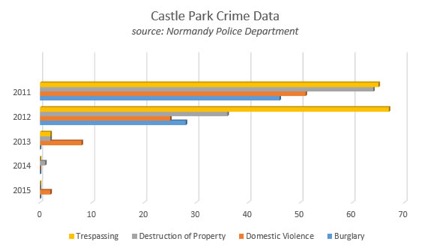 A recent Castle Park resident safety and security survey was conducted: 88% of responders felt that safety and security is much better now than before the improvements were made. The same 88% said they feel safer now than before. Residents commented that they are very happy to have police sitting at the front of the property monitoring who comes into the building and are glad they do not have to worry about unwanted visitors.